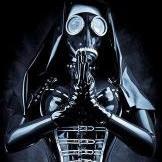 By Alexanderrr,
August 10, 2016 in Information Desk